In 1909…..Wilbur C. Place opened an optical business on 26 State Street in Caledonia NY. It is presumed to have been his residence with the phone number being 32-J.  According to his business card, he offered to examine eyes and fit glasses. He was also known to be involved in the jewelry business.

Wilbur was the son of Mr. and Mrs. Robert Place a prominent businessman of Caledonia, who developed his business skills with his father in New York City.  Wilbur was Mayor of Caledonia in 1924-25. One of his accomplishments was the construction of an ordinary clock with an automatic bell at the local high school. It would ring every 40 minutes. Other communities would travel to hear the bell and it is claimed that a visiting principal from a nearby town ordered an identical clock for their high school.

In 1947 Wilbur moved the business from State Street to the Boorman Block office building which is now attached to the Cozy Kitchen. It was here that it became known as Place Optical.

The business was later acquired by Charles Privitera who became a New York registered optician in 1947. Charles was originally from Rochester, who had a background in the jewelry business and was often peddling jewelry as well as spectacles.  It was known that he fitted and sold hearing aids at this location.

The next person to acquire the business was Dr. Marvin Budgar, originally from Geneva, NY. Dr. Budgar was a 1962 graduate of the Pennsylvania College of Optometry. He worked in Manhattan after graduation before returning to Upstate NY and purchasing Place Optical.  His stories include immediately getting rid of the jewelry and hearing aids and turning the business into a full scope optometric practice.

The business grew quickly as Dr. Budgar also started a spectacle lab to manufacture glasses for other optometrists in the region. In 1972, he purchased a farm house, built by Abe Sickles, on the west side of town just over the Genesee county line. 8663 East Main Road LeRoy NY (in the hamlet known as Limerock) is where the business is still located today.  The farmhouse was a larger facility and the upstairs was made into the optometric practice where they examined patients and a spectacle lab was in the downstairs. They began distributing optometric supplies and contact lenses.

By 1980, the Lab business had grown to be one of the top spectacle labs and optical distributers in the Northeast. To accommodate the growth, a warehouse addition was built attached to the house. The optical distributor was known as WELDCO named after Budgar’s children. Wendy, Laurie & David, Co. 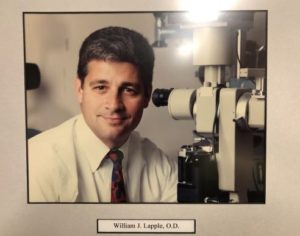 As an optometry student, William Lapple first met Marvin Budgar in Cooperstown, NY at the New York State Optometric Association meeting where he was networking and trying to find job opportunities.

After graduating in 1984 from The Ohio State University College of Optometry, Dr Lapple worked in an ophthalmology practice on Portland Avenue next to Rochester General Hospital.  This provided good experience but not the family style optometric practice that he was hoping to someday own and operate.

On February 14, 1986 Dr. Lapple started working a day a week for Dr. Budgar and quickly realized this might be the opportunity he was looking for. On July 1 1987 Dr. Lapple purchased Place Optical becoming it’s fourth owner since 1909.

In 1990, Weldco moved into a larger office complex and warehouse on Flint Hill Rd. This allowed for the practice to be expanded into the warehouse space making it a larger, more modern optometric facility. Dr. Lapple transformed the practice into a full-service primary eye care setting to provide medical and surgical eye care, and a full service optical and contact lens dispensary. 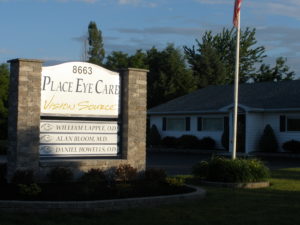 Eventually the business was renamed Place Eye Care to reflect the type of practice it is today.

During the past 35 years, there have been a number of young optometric associates that have practiced at Place Eye Care and have gone on to become some of the most successful optometrists in the Rochester area.  The most recent is Dr. Lydia Pickrell, an Ohio State Graduate, who is originally from Virginia and is working there today.

Two Ophthalmologists, Dr. Susan Presberg-Greene and Dr. Alan Bloom have been associated with Place Eye Care. Dr. Bloom is still practicing today and both have provided over 4000 surgical procedures to local community. 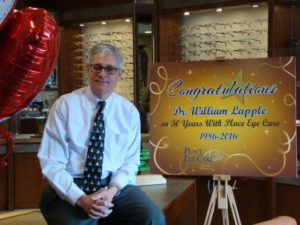 Through the years there have been many upgrades to keep pace with the modernization of health care. The most significant opportunity was the joining of Vision Source in 2004.  Vision Source is a franchise network of over 3000 independently owned optometric practices in the USA. This affiliation has enabled Place Eye Care to continue to provide sophisticated eye care for the community. It has enabled access to the best vendors, affordable digital diagnostic instruments and equipment and the sharing of best practices with a larger group of providers allowing a smaller independent practice to provide state of the art optometric care.  Place Eye Care is the perfect example of this.

As we celebrate 35 years with Dr. Lapple and 112 years as Place Eye Care it is truly a great experience to be able to support the communities of Caledonia, LeRoy and the surrounding areas who have been such an important part of our heritage and success.

Browse our online store for contacts and other eye care products.

You can schedule your next eye exam with us online!